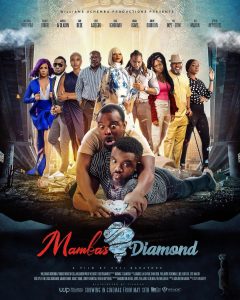 When popular Nollywood actor and comedian, Williams Uchemba announced his first film earlier in the year as a producer, he got not a few in the industry anticipating the action comedy titled ‘Mambas Diamond’, as he took to his Instagram page to show off the making which was quite an interesting watch. He further went behind the scenes, showing footages from the film’s location in an actual diamond mine in Johannesburg, South Africa. Fast forward to April, the instagram sensation is already out with the official trailer for the movie which is out on cinemas.

The snippet of the forthcoming project hints on the movie being set in Sierra Leone, New York and Lagos, Nigeria. According to Uchemba, the much-awaited movie will hit the cinemas across the country from 13th May. “The Official Trailer of Mambas Diamond. After 22 years in the film industry, it is with great pleasure that I present to you my first feature film,” the award-winning actor wrote. “Ladies and gentlemen the official trailer of Mambas Diamond. Save a little token for this movie as it hits all the cinemas nationwide from the 13th of May, and at the end, all the Glory will go to my God and king, he adds.” 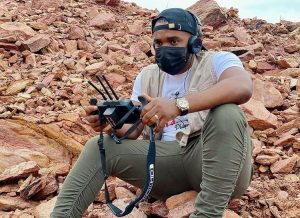 The film stars Gabriel Afolayan (as Elenu), Osas Ighodaro (as Eloho), and Williams Uchemba (as Obi) playing the lead roles. Also parts of the cast include Nse Ikpe-Etim (as Mamba), Jimmy Odukoya (as Jay), Sam Dede, Ejike Asiegbu, Dibor Adaobi Lilian, Ayo Makun, Nancy Isime, Venita Akpofure, amongst others. In the new trailer, Uchemba appears to take on his familiar comic character alongside Gabriel Afolayan. The star-studded ‘Mamba’s Diamond’ directed by Seyi Babatope is about a heist gone wrong. Or rather, a heist accidentally gone right . . . Two amateur thieves hatch a reckless doomed-to-fail plan to jack a car, but they end up in an inadvertently successful diamond heist.

The less than two-minute trailer reflects on a heated fight as they try to elope with diamonds worth millions of dollars belonging to the “queen of the underworld darkest cult group,” known as Black Mambas.

As such, this movie involves a diamond mine setting, as Uchemba showed on social media while filming. The star-studded feature is co-executive produced by Melvin Ejiogu and produced by Darlington Abuda. Williams Uchemba has had his fair share of movie appearances in Nollywood. Not least as the hilarious law enforcement agent in Sugar Rush, or the other tech guy in Merry Men: Another Mission, both in December 2019.

But Mamba’s Diamond is very much his own project, on the stables of his self-titled production company, Williams Uchemba Productions.

Uchemba has established himself as a household in the Nigerian entertainment scene since he made his movie debut. He rose to fame after featuring in ‘The Journey of the Dead’, a Nollywood blockbuster released in 2001, and has since snagged numerous awards.