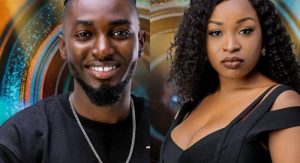 This weekend’s live show has seen the eviction of Jaypaul and Jackie B. The housemates join 13 already evicted contestants of the ‘Shine Ya Eye’ season.

Kicking off with a recap of the week’s activities and a brief chit-chat with the housemates, show host Ebuka Obi-Uchendu announced Jaypaul as the 14th housemate to exit Biggie’s house.

After another round of chit-chatting with housemates, Ebuka announced the eviction of Jackie B.

Coincidentally, both housemates got spared from last week’s king-size eviction after winning immunity by emerging heads of house during the week’s games.

Away from the seriousness of the evictions, a key highlight of the show was Ebuka discussing housemates entangled in situationships including Cross, Queen, Whitemoney, Jackie B, Angel and Yousef.